When I was a kid I can remember my mom telling me that she could remember exactly where she was when JFK was assassinated. I never really understood that until September 11, 2001. I will always remember the events of that day. Well, this is is how I remember it, anyway.

It started like any other Tuesday. I got up and went to work that day. Assuming I was a few minutes late. Assuming probably hungover. Because that's how I rolled back then.

At the time I was working for a medical billing company that just so happened to service doctors in New York City. It wasn't long after I got to work, that a co-worker said a small plane just hit the World Trade Center. 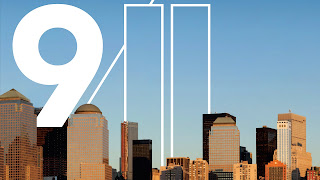 Always being up on geography, I said, " Oh no! Where's the World Trade Center?" I was met with an eye roll. Which was typical. I don't think anyone in that room really thought I had what it took to be a serious medical biller. Myself included.

Turns out BCBS of NY was located in the World Trade Center. The same BCBS of NY that I was calling each and every day. For months now. So that's what WTC stood for on all those envelopes I threw in the mail on the daily.

The lines were now busy. Maybe this co-worker knew what she was talking about. And that's when I started to pay attention.

This was 2001. So technology was not like it is today. The internet was hardly working. But the doctors office below us had a television in the waiting room. I got down there in time to see 2nd plane hit.

I still had no idea what any of this meant. In my mind I was thinking what an unfortunate coincidence that two planes would hit two building so close to one another. Amazing.

People were horrified. It was now clear to everyone, except me, that this was an act of war. I still wasn't quite understanding what on earth was going on when the first tower collapsed.

I had no idea what I was even watching. A much, much more mature co-worker, who ate microwave popcorn and tuna like it was her job, looked at me with a blank face and said, the entire building just collapsed. I seriously could not wrap my head around it. I said, what do you mean?

In a not so patient voice she explained that a plane hit the building. Then the building collapsed because of all the heat. And the other building is probably going to do the exact same thing.

I was beyond confused. So when I asked, "but what about all the people inside of there?" I didn't need a verbal answer. Their faces said it all.

Naturally, my next question was, who would do this to us? Who doesn't like us? Us meaning the United States.

Another co-worker, who just happened to be plucking her eyebrows at the time, said in a very condescending tone, Um, everyone hates us. Everyone.

I learned a lot that day. So much has changed since that day. Life as I know it would never be the same.

We were dismissed from work soon after. My mom was very sick and in the hospital at the time. So I headed there to check on her.

I sat with my mom for the rest of the day. Just watching, in horror, all of the images on television.
I can remember finally figuring out what I was hearing on TV earlier. It was people jumping out of the burning buildings. I still have such a hard time with that.

Those people were someone's loved one. A mom, dad, son, daughter, husband, wife, brother, sister. These people meant the world to their family and friends. It was, and still is, so overwhelming to think about.

After a while, I had to run out to my car. When I tried to get back into the hospital, security wouldn't let me back in. Everyone was in a panicked state of chaos.

No one was allowed to go back into the hospital. No one knew what was going on. No one knew if Chicago would be next.

So, I left and went to the grocery store on my way home. It was so weird there. All of the lights were on as bright as can be. And talk radio was blaring the latest coverage of what had happened. It was scary. Because there was so much unknown. Everyone was on edge. Yet so friendly to one another.

Now all I do on this date is answer my kids' questions. They were all born long after 2001. So they do not know a life prior to what happened that day. This is their reality. They'll never know a safer, simpler time. And wow does that make me sad to think about.

Watching all of the tributes today is nice. The importance of remembering all of the lives lost and praying for the survivors is what I really want my kids to understand. Just to have some empathy for what all of those families went through that day.

I hope they'll go to bed tonight better people for seeing what so many others endured that day. People on the planes, people on the ground, people in the buildings. And all of the other people whose lives were impacted that day.

One thing is still unbelievable to me. No matter how many times I see one of those planes hit one of those towers, I still gasp. Even after seventeen years.