One of the perks, besides losing my income and health insurance, of being an unemployed Chicago Public School (CPS) teacher is not having to go on field trips.  I always dreaded those days.  Most laypeople probably think, what a treat! A day of no teaching, out of the classroom, just laughing and frolicking with your beloved 30+ students.  But it's not that glamorous. It's actual hell.  Taking the shitshow on the road is no picnic.  It's hard enough to keep track of 30+ students in an overcrowded classroom, let alone out loose in the world.  And the parents who show up to chaperone?  I was always extremely skeptical of the dad who had nothing to do during the day but go to a museum with a bunch of 10-year-olds. It was like adding an extra student. That is, until I became that dad.

Yesterday was the first time I chaperoned a CPS field trip as a parent.  I didn't want to do it, but the circumstances warranted me going.  And honestly, I had nothing else better to do.  I was dreading it, but I'm a great mom and that's what unemployed great moms do.

The adventure started out with me getting a call from the school asking where I was? Where am I? I'm unloading the kids from the car in the back parking lot, 5 whole minutes before school starts mind you. I was informed on field trip days you're supposed to get there a little earlier.  Info I could have used 15 minutes ago.  The yellow school bus was waiting for me in the front of the school.  Fully loaded with all the other parents and students, all smiles and ready to go.  So we board, with our heads bowed in shame. The only seat left is the very last one that's not even a real seat, it's a super weird sorta-half seat. You know the one I'm talking about. As we walked down the aisle, all I could hear in my head was "seats taken".

So we get all buckled up, because those seatbelts are really going to save your life, and we're off.  Now I am only 5 foot 3 inches tall. I do not have long legs.  But I was sandwiched into this damn seat. I can't imagine all the moms and dads who were way taller than me. 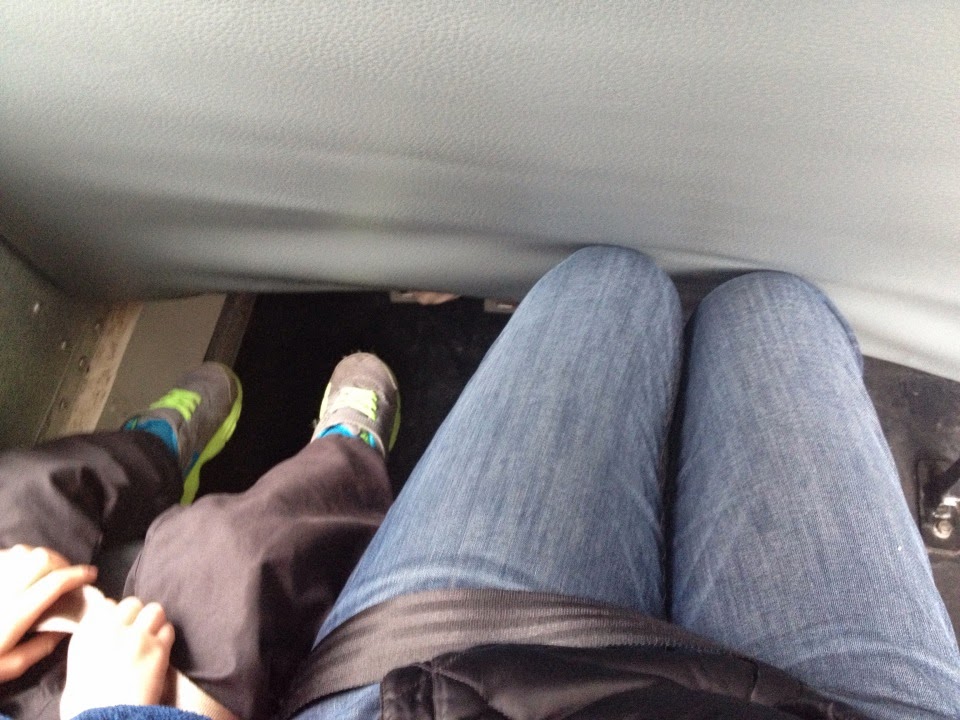 Finally, we arrive at our destination to see a riveting performance of "The Three Little Pigs". It was cute. I mean not pay actual money to see it cute. But cute. But I couldn't enjoy the show.  My mind was racing. What happens when we get back on the yellow school bus? What is the protocol? Do we automatically sit in the same seats we came in? Or do I dare take a new, bigger seat? I never had to think about this before.  I was always the one in charge. The one barking the orders. The one telling people where they could or could not sit. The way I like it.

I finally had to let it go.  It was in God's hands.  Whatever was meant to be will be.  Everything happens for a reason. It is what it is. Turns out, we get back on the bus in the same exact order we got off.  Because, naturally, we remained in a uniform, single file line the entire day.

On the ride home, I found myself praying. Not only that we make it home alive, but that the next time I'm on a yellow school bus, it's under completely different circumstances.  I better be on my way to a concert or a baseball game.  Drunk. So drunk that I don't even realize I'm on a dreadful yellow school bus.  I want it to be full of adults only.  Everyone standing. With men using bottles to urinate in.  With women puking out the windows that only open half-way because they were so overly excited about having a night out sans kids. The way riding on a yellow school bus was meant to be.
Posted by Unknown at 2:07 PM