When I was in eighth grade my mom took me to get my hair cut at her salon. It was a real treat. She was also getting her hair colored and cut. The girl washed my hair and when she was combing it she kept looking at it real close. She then called another girl over and together had disgusted looks on their faces. Turns out I had a nice case of head lice erupting on my scalp. They made me stand up and walk out of the salon while they followed spraying some sort of disinfectant after me. I had to sit outside of the salon. Now don't you worry, this didn't interfere with my mom getting her hair done. She let me sit outside scratching away as she got all glammed up. A few weeks prior, a note came home from school about an outbreak of head lice. I read the letter and told my mom I thought I had it. She blew me off by saying, you're crazy, you don't have lice. Never even giving my head a once over. So that's what I thought about while sitting there outside of that salon. Humiliated. Watching my mom through the glass.

So what could be worse than being thirteen and having lice and being treated like a leper? Being a mom and finding lice on your own kids' heads, that's what. Last year lice was going around the neighborhood. Spreading like wildfire. It was only a matter of time. Shelly's kids got it. Our days were numbered. Of course, when Shelly's kids got it, instead of staying away, we all went right over there to check it out. Shelly and I cut out a head and some bugs from construction paper and made a "pin the louse on the head" game. My kids look up to Shelly's kids and want everything they have. Everything. Even lice. So when my kids finally did get it, they were excited. I was not. I had been doing daily checks for weeks. And one day there they were. They were not invited, but we'd been expecting them. 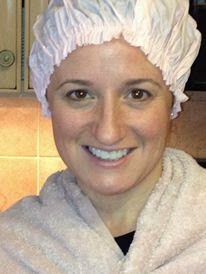 Washing that lice right out of my hair.

Beau and I are generally pretty calm people. And we were calm at the beginning. We went to the drugstore and spent a fortune on those lice removal kits. We bought the top of the line gold-plated nit comb. We came home and got down to the business of de-lousing the shit out of this place. We were pumped. High fives all around. We treated everyone's heads and combed everyone out one strand of hair at a time. Washed everything, sprayed everything. Threw out every stuffed animal in the house. Apparently when you're a louse, the next best thing to a living being is a stuffed animal. It's really the only silver lining to getting lice. We threw away every last one. We repeated this routine for a few days and I'll be damned if I didn't see a freaking louse run right across my daughter's head, again. So I took to the internet. I read that Listerine is what really does it. Information we could have used a week earlier. So off to the drug store we go to spend a mere five dollars for the mouthwash and shower caps. I soak everyone's heads and comb everyone out again. Including myself. I was convinced I had it too.

We kept checking everyday for any more signs of life on everyone's scalps. It seemed we were in the clear. Until I had Beau check my head. According to my beloved, obviously sight-challenged, Beau, I was still ridden with lice. And of course I was itching like crazy just thinking about it. Enough is enough. I was losing my mind. I picked up the phone and called an agency that comes to your house to get rid of the lice for you. Experts. They even guarantee their work. Money was no object at this point. Just get here and get rid of this lice once and for all. Great news, they'd be out later that day. So we sat around scratching until they arrived. They came in and checked all of us. I braced myself. Shockingly, we were told we don't have any louse in this house. I'm sorry, I know you're the expert, but Beau saw lice on my head just this morning, so just go ahead and take another looksy. She assures me, again, I am lice free. So I calmly turn to Beau and lovingly ask him, then what the F did you see on my head that you thought was lice, darling? Beau was speechless. Which is good because we didn't talk for a long time after that. Oh my Beau. Sweet, loving, blind Beau. Telling me I have God damn lice when I really don't. What a doll.

It's impossible to understand the hell living through lice is until it's actually happened in your home. I do live in fear that it will be back again someday. But I will be ready. With my fine-toothed terminator comb and plenty of booze.