The other day my youngest had my phone. Because he's three and knows how to operate it better than I do. It was a typical day. I was just trying to get stuff done and he was begging me to take him to the park. I kept saying, in a few minutes, as soon as I finish this up. So of course I give him my phone to buy me more time. The next thing I know, he's on the damn phone asking Suri to take him to the park. Ouch. That hurt. Okay, we can go to the park now. Although it would be really awesome if Suri could take him. But this isn't an episode of the Jetson's. This is my life. And I don't have a smart-talkin' robot maid.

When I was pregnant with my first, I remember reading somewhere that as a mom you need to put yourself first. It's a hard concept to comprehend when expecting a new baby, but after the baby was born, I began to understand. If you don't take care of yourself, how can you possibly take care of your kids? It does make sense. It's exactly what the flight attendants instruct you to do on an airplane if the oxygen masks are needed (thankfully this has never happened to me, more on my fear of flying later) but they always tell you to put the mask on yourself first then help your kids. Say what? Seems a little selfish. I always picture George Castanza knocking over kids and old ladies trying to escape a fire. But when you think about it, it makes total sense. If you can't breathe, how are you supposed to help your kids breathe? Now if you're one of Kate Gosselin's kids, your chances of survival are about one in eight. We'd find out really fast who her faves really are. Now that would be a reality show. 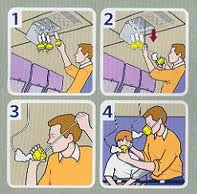 See?
Since having kids, I have worked full-time, part-time, and no-time, and I still don't know which is best. I do like working. Especially with four kids. I need to do something for myself where I actually use my brain and interact with other adults. And I like putting my education to good use. But when I am working I think about everything that needs to be taken care of at home. And when I'm at home, especially now being laid off, I feel amazing guilt for not contributing to our income. I have come to realize it's impossible to have it all. I really can't have my cake and eat it too.  After all, I'm a woman, not a man.


When my oldest started school, I missed everything. I could never go to any school events. I felt bad. Until the time came when I was able to participate. It was Halloween and I just started working part-time and was going to be off on the day of the big Halloween parade. Yay! Finally! I would be the mom at the school function. Swapping recipes with the other moms. Cause that's what happens there, right? My son was so excited I would be there, or so I told myself. So I get there, get out of the car and watch him walk by in costume. I waved. He waved. That was it. That was what I had been missing? That was what I had been feeling guilty about? I felt robbed. He barely even noticed me. He was happy to see me, but what if I wasn't there? He would have been fine. I had built this all up in my head that I was cheating him by working and missing his activities. When I was offered to go back full-time, I took it. And I didn't feel bad about it.

It was then that I began to realize it just doesn't matter. They have a nice life surrounded by amazing people. They have two involved parents. One of us is normally here when they wake up and to kiss them goodnight. They are loved probably more than they will ever know. If the kids ever ask why we have to go to work, we say to make the money to buy the toys. That's all they want to hear. And then they actually push us right out the door.

Now that I am home all day, everyday, the only one I feel bad for is me. I interact with women on the buy/sell pages of Facebook more than my own family. It was a long winter. But things are beginning to perk up along with the temperatures. And soon the kids will be off for the summer and I won't have to even think about missing stuff at school. Or making their dreaded lunches. Because when it really comes down to it, the worst part of being a mom is having to make the lunches. No one tells you that. It's not in the books about what to expect. But I swear to you it's the worst. I long for summer to begin so every meal can be a judgment-free pop tart. And I won't feel one bit bad about it. Because I'm going to put myself first, like the flight attendant instructed me.