Allow me to introduce my Aunt Batsy. She is my Dad's oldest sister. And it would be impossible to truly ever explain her to anyone. But I'm going to try.

The other day I left my cell phone at her house. I didn't realize it until I got to the grocery store. So it was about an hour before I got back to her house to retrieve it. When I knocked on the door I heard her yell.  You left your phone! Your phone is here!  Yes, that's why I'm back. She told me it kept ringing the entire time I was gone. That's odd, I normally don't get many calls. Upon further investigation, I see all the missed calls were her trying to get ahold of me to tell me she had my phone. Nine missed calls. From Aunt Batsy. Nine voicemails. From Aunt Batsy. She had my phone.

Modern technology is not her thing, like many people of her generation. I can't bring myself to tell anyone her age.  I'm not even exactly sure I know it. She is the oldest of five siblings and the only girl, but she always told us she was the youngest. So, of course, I believed this. When I was in high school I had my friend over at her house. She asked how old Aunt Batsy was and I answered 35. I mean that's how old Aunt Batsy told me she was.  Why would she lie? My friend looked right at me and said, she's not 35. Not even close. That was the first time I really looked at Aunt Batsy and thought about it.  My friend was right. Not even close. 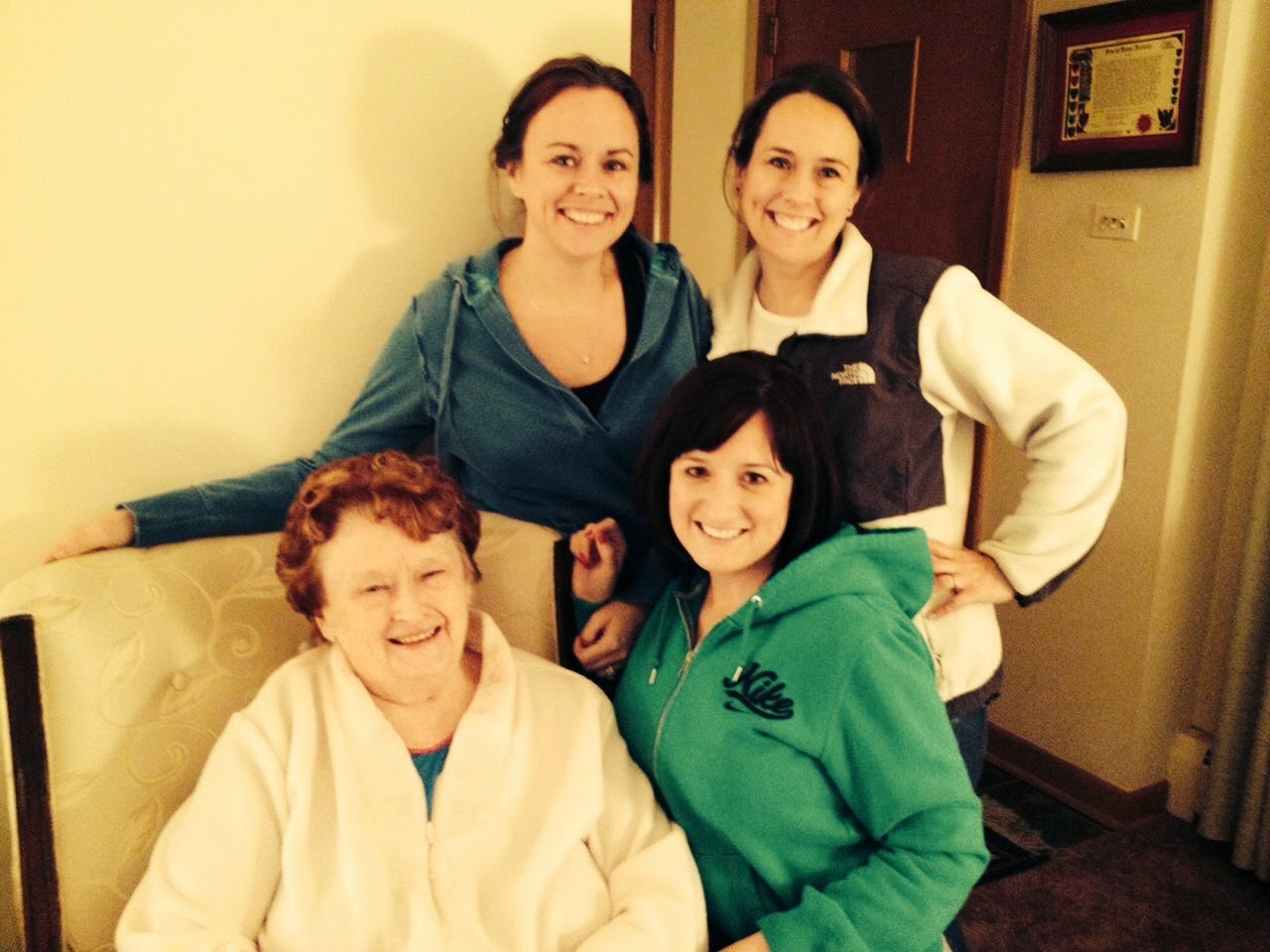 Shelly, Boo, Aunt Batsy, and me, in more recent years.

Aunt Batsy lived with my Grandma and took awesome care of her, and that's why my Grandma lived till she was 89. When my grandma died, Aunt Batsy wanted to get her a nice new dress to spend her eternal life in. So my cousins, Boo and Shelly, and I, took her shopping. This is where it got weird. We arrived at the store and Aunt Batsy didn't want to tell anyone why we were there. Just a couple of college-aged girls and their aunt shopping in the old lady dress section. We find a nice peach-colored, bedazzled dress that screams eternity. So then it happens.  She looks at us and asks, ok, which one of you are going to try it on? Um, excuse me? Try on the dress our dead Grandma is going to be buried in? Gross. No thanks. Immediately, Boo and I take a step back and there's Shelly, front and center volunteering. Turns out Shelly didn't really have a problem with this. She rather enjoyed it. She came out of that dressing room and rocked that old lady dress. The rhinestones made her eyes sparkle. Shelly even went as far as to lay down in it, so we could get a glimpse of how it would actually look on Grandma. Now that's a granddaughter.

I like to write on Facebook about Aunt Batsy. Just a pic of her and my kids. Something funny she said or did. She's great material. Little did I know she knew about all this. Turns out, she gets calls from people who see the posts. So I'm over there one day and she has something really important to tell me. So important I can't even remember what it was. But she looks me right in the eye and says dead seriously, now this is between me and you, don't go posting this on ebay. I promise I will never post anything you say on ebay. And I never have.