Since having kids, the days I really dread are the ones that involve grandparents. Our kids have been robbed in this department. Our kids never knew my parents, or Beau's dad, so they didn't have to experience the heartbreak of losing them like so many of my friends are going through with their kids now. But I think I would still rather them all just be alive. Call me crazy. Because only having one live grandparent really sucks. For everyone. Especially for Beau's mom, Madeline, because she is everything to them. No pressure. But everything falls on her. She has to be grandma and grandpa. She is all that they know. But she has nine grandkids and it's not always easy to spread yourself so thin. But she does. All the time.

Today was Grandparent's Day at my daughter's school. That's what they do instead of a kindergarten graduation. Grandparent's Day. What an awesome idea. For kids with living grandparents. For the kid who had four sets of grandparents there. Four sets. That's eight people this kid refers to as grandma or grandpa. All of the grandparents were divorced and all remarried and all have an active role in this kid's life. They didn't even have enough seats. But it was okay, because we had some to spare. I actually felt bad for this kid. It must be really hard scheduling all of those sleepovers and sorting through all of those Christmas gifts. In the school's defense, they do say you can bring a "special friend" if you're running low on grandparents. At least that's what they wrote on our invite. So that's where Aunt Batsy comes in. You know, because she is special.

Last year when my son was in kindergarten, he invited Aunt Batsy to grandparent's day. They give each kid two invitations. So naturally one went to his grandma and one to the next best thing, Aunt Batsy. She refers to herself as their "almost grandma". They just look at her really confused when she says this. I just pretend I didn't hear it. 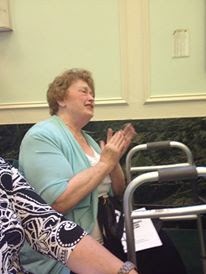 So Aunt Batsy knows this day is coming again this year. And she's prepared. She's knows what to expect this time around. And as luck would have it, they perform the same songs as last year. Apparently she's been rehearsing because she sang every song louder than any kid on that stage. She's a performer. Loves the spotlight. She also clapped along, even though neither was encouraged.  People were actually turning around to look at her. She waved at them. Or gave a little wink. But it was fine. Everyone there was in a great mood because they had a special someone on that stage singing to them.

Uh oh. Suddenly, out of no where, smiles turn to tears. The grandparents song. Every single person in that room starts crying. Again, just like last year. I'm the one who should be crying. I'm the only parent here on grandparent's day. It's not even a good song. The lyrics don't even rhyme. But it didn't matter to anyone there. It was as if each kid was a soloist singing just to their special person. Luckily they ended on a high note. With You're A Grand Old Flag and everyone was able to regain composure. Not as fast as Aunt Batsy. She was able to turn off the water works and jump right into that song without missing a beat. It's a gift.

Afterwards, we are invited for some light refreshments. And I mean light. My daughter was as happy as can be. She was very proud of herself and loving every second of her grandma and special friend being there just for her. She has no clue what she's missing. And for that I'm grateful. Heartbroken, but grateful.