Not Yo Mama's T-Ball

This Spring I only have two kids participating in an organized sport. Two kids too many, if you ask me. It's baseball season. We live in Chicago. It's pretty much still winter here. Unless it's blazing hot. I can't tell you how many times this week I have had my air conditioning and heat on in the same twenty-four hour period. I got sunburn one day and literally almost froze to death another day. Then there's the rain. The t-ball kids have to tough it out and play in the rain, as long as there is no lightening, but yet every game ends in a tie and at the end of the season everyone gets a trophy. We're sending some mixed messages here.

My four-year-old daughter plays regular old t-ball. A park district league. All games at the same place. All games over in one hour. Uniform is a t-shirt and hat. Half the kids wear jeans. More than half the kids have no clue what they're doing there. But all of them are there because they know they get a sucker at the end of the game.  Not too bad. I can handle it. It's cute. She plays with all of her cousins and the woman who runs the league is an actual saint. I don't know how she does it. She must really like suckers. 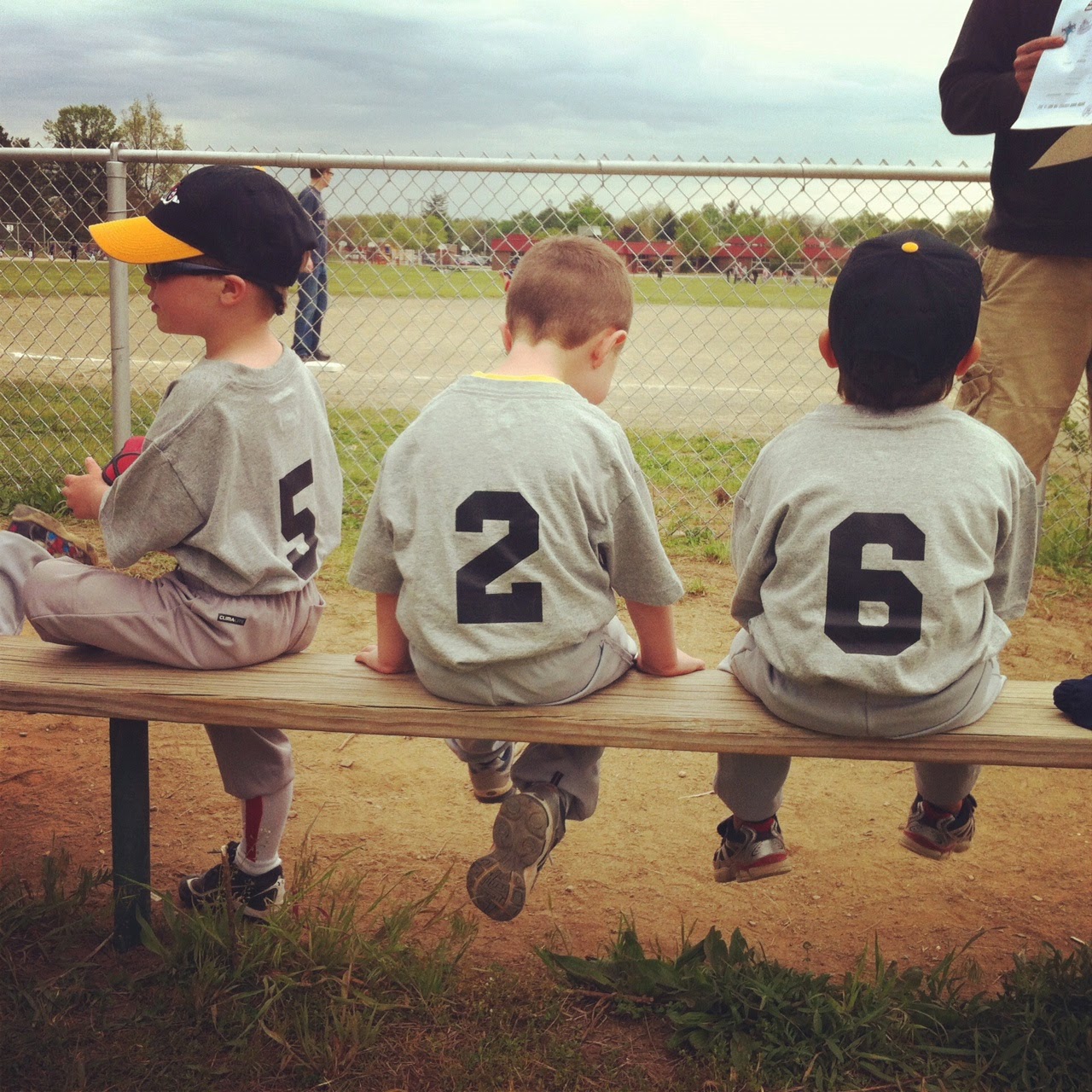 I used to think t-ball was bad. You never know what you have until it's gone. My six-year-old son plays in a serious league. No tee. Games at different parks. Real uniforms. Spikes, cups (not the kind you drink out of), batting gloves, bat bags, the whole nine yards (that's my fave baseball term). Because he's six. Practically a major-leaguer. But he really, really likes baseball. So I'm really, really happy for him. The only one I'm not happy for is me. The games are so long my phone can't even hold a charge for the duration. I have to conserve the battery, which means I have to find something else to occupy my time. Like watch the game. Hey, mom, did you see that? Oh, who me? Oh yeah, of course I saw it, babe. I was capturing every last memory right here on my phone. So we can relive it later when we get home. Because it's so fun.

I know sports are important. I know they are learning teamwork and a bunch of other skills to prepare them for the "real world". But I have a pool. And I like to be in it. Especially when it finally gets hot enough and cold beverages will be served.

Now I usually have my other kids with me. So that means spending the equivalent of their college tuition at the concession stand. Two dollars and twenty-five cents for an ice-cream bar of a has-been cartoon character? A cartoon I've never actually seen them watch. With black gumballs for eyeballs. I know my youngest is going to end up with some major stomach issues with the amount of gum he has swallowed already this season. Seven years! And what is that stuff made of? It stains their clothes and their skin. Is it a special chemical? Are the ice cream bar companies in cahoots with the stain removal companies? If they're not, they should be.

I love the days when the weathermen and weatherwomen are calling for storms. I try not to get my hopes up but it's impossible. It's sunny and eighty degrees at noon, but the storms, they are a comin'. I can hardly contain my excitement. Oh no, honey, your game is rained out? What a bummer. I don't know why God is making it rain and I really don't know why you think God is responsible, but neither really matters. All that does matter is that there is no game tonight. Let's get tacos.

It's all fun and games until those rain outs have to be made up. A double header? Excuse me? Come again? Two games in a row on the same day? On a Saturday? That's like five hours of baseball. In. A. Row. What the hell is going on here? Can't we just call it a tie and just give them all trophies? Oh how I long for the mundane days of t-ball. I should have appreciated what I had when I had it. I can only imagine what next season will bring.
Posted by Unknown at 5:33 PM