Giving birth to my third child was an experience I'll never forget, for many reasons. The days leading up to my delivery we had a squirrel living in our attic. It scared the hell out of me. A guy came and set up a trap and everyone reassured me that there was no way it could get to any other part of the house. I was skeptical to say the least. If it wasn't nerve-racking enough to hear the damn thing all day long, one day I went down to throw some laundry in and guess who jumps out at me? Little Mr. Squirrel who could never ever escape the attic. I lost my shit. I grabbed the two other kids and went down to Shelly and Quint's and ever so calmly called my husband, Beau, at the office and informed him if he ever wanted to see us again he would get that damn creature out of our house once and for all. I also called a reputable company that handles this sort of thing and told Beau, in an extremely calm tone, to meet them at the house. Turns out the big, strong, tough, animal catcher was a lady. This did nothing for Beau's masculinity. Long story short, the squirrel was gone once and for all. And I went into labor the next day. 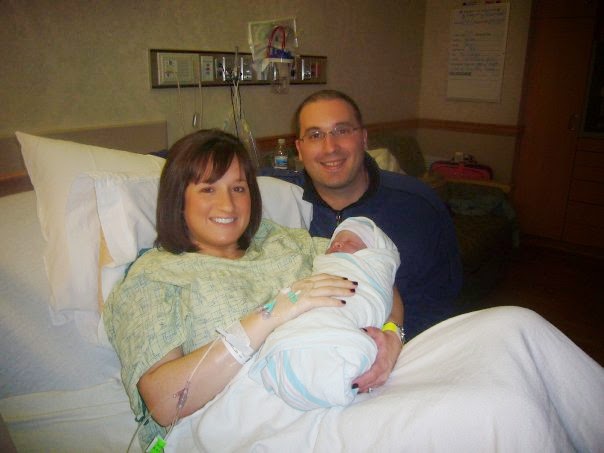 I was very excited to go to the hotel, I mean hospital, to have my third. I had done this twice before and knew the drill. It was a vacation of sorts for me. I had a 2 year-old and 1 year-old at home so I couldn't wait for a little R&R. We get to the hospital, I spit the kid out, fake some pain, get my vicodin, take pics with the kid and Beau, send kid to the nursery and I'm in heaven. All alone in a room by myself, in a bed by myself with a nice little buzz. It was perfect. And Beau was perfect. Asked me if I wanted something to eat. Even though I start my post baby diet the minute I deliver, I figured a little turkey sandwich wouldn't hurt. So off my beloved Beau goes down to the cafeteria to get his glowing wife a sandwich. Beau was gone a while. I was getting worried, but really, just annoyed and hungry. Finally I get a call. From the ER. Seems Beau collapsed in the elevator on the way back up with my food. His back went out and he was in a crazy amount of pain. Eye Roll. I just gave birth, I know pain. So I asked the nurse on the phone, oh he was on his way back up? Did he happen to have my turkey sandwich? I'm not sure if you know but I just gave birth and I'm hungry. The nurse said Beau was very concerned that I get the sandwich and they would send it up. That's what I love about Beau.

It was just an average turkey sandwich, at best, but the vicodin helped. So I'm sitting there thinking well now what the hell do I do? So I call my mother-in-law and tell her what happened. She was hysterical. Why was she so upset? I had to politely remind her that I was the one who had just given birth. This is about me, not Beau. A few hours later I get a call from my brother-in-law who is now in the ER with Beau. Beau wants to talk to me. Mind you, Beau is hooked up to a dilaudid drip. I give birth and get vicodin, Beau goes for a turkey sandwich and gets a dilaudid drip. Seems about right. Beau can't speak because he's so drugged up. I have never been so jealous in my life. I go back to sleep and think ok, he'll sleep it off and we'll all be home tomorrow. No big deal.

The next morning I'm just sitting there. I don't know what the hell is going on. I start making some calls. Turns out Beau was released and was home. Um, hi, remember me? The baby and I were going to be released as well. So I shower and get my face on and put on my pre-pregnancy jeans. Now it's just me and baby. I made several phone calls and no one was around to come pick me up. I called everyone I knew. I allowed myself a little pity party because if I had parents surely this would not be an issue. But I don't have parents and this was an issue. Then I hear the nurses talking smack about me. No, she still doesn't have a ride home, I don't know what she's doing. Is this an episode of "Sixteen and Pregnant" or my life right now? Finally my cousin Shelly had her mom, Lonna, come babysit her kids so that she could come pick me up. Shelly was my actual last choice. I don't care for Shelly's mad driving skills, but desperate times call for desperate measures. So now it looks like Shelly and I are lesbian lovers leaving the hospital with our miracle baby. Never you mind who the father is!

Thankfully we live close to the hospital. Shelly only jumped one curb on the ride home. In the house I go, carrying the baby. I had to actually step over Beau as I walked in. He was on the floor and couldn't move. Yes, this is what I need. Two toddlers, a new born, and Beau laid out on my floor. What about me? I just gave birth! I'm supposed to be resting with my feet up with Beau at my beck and call. Not gonna happen. Beau was in serious pain and couldn't move. He eventually graduated to the couch and was able to get around with the help of a walker. Like an old man. He tried helping with the kids, but he would lose all feeling in his arms and drop whatever he was holding. So after the first kid came-to, we decided him holding the kids wasn't a good idea.

Days turned into weeks and Beau was finally feeling better. So one day I think, you know what, I'm going to take a nap. What the hell? So I tell Beau my plan and he's thrilled or at least he should have been. I go to bed and fall fast asleep, only to be awakened by Beau a short time later. Seems our one-year-old drank some nail polish remover. For the love of God! I just gave birth. I just want to sleep. And what does this have to do with me? Call poison control and ask them what the hell to do. And be sure to tell them this happened on your watch. I don't want them to be all judgey the next time I have to call.

Turns out nail polish remover tastes so bad that's it's nearly impossible to drink much of it. Flush the kid out with some juice and you're good to go. And yes we ended up expecting another baby just a few short months later. But that's a blog for another time.