One day Beau and I woke up and it was hot out. It was June. In Chicago. We did not have kids nor did we even know if we ever wanted to. We were LIVIN'. So we went out to our barren backyard and had a convo that went something like this. Wow, it's hot out today...Yeah it is... We should go buy a pool... Yeah we should. And that's exactly what we did. Just got in the car and went to the closest pool store and bought a freaking pool. With cash. Because we were hot. We don't have convos like that anymore. God do I miss those days.

Memorial Day is one of my favorite weekends of the year. We like to remember the men and women who have given the ultimate sacrifice, many from right here in our own neighborhood. And it's normally the weekend we open our pool for the summer. And when I say we, I mean Beau. I do put on my bathing suit and watch. But I'm normally busy rearing the children. And when I say rearing, I mean yelling across the yard for them to stop fighting or to refill my beverage of choice.

I am always so thankful that we had the foresight to buy the pool when we did. I love having it and can't imagine summer without it. Everyday is a party and I wouldn't want it any other way. So many awesome nights with family and friends have resulted from our spontaneous purchase. And for certain, one of our children is a direct result of a drunken pool party. Again, wouldn't have it any other way.

One particular summer will always hold a special place in my heart. In May of that year, Beau was laid off. It sucked. But not as bad as finding out that I was laid off as well. So we had no income, no health insurance, three babies, and a pool. It could be worse. We decided there was nothing we could do about our situation, so we might as well enjoy the hell out of the summer of us. And we did. Everyday was a flipping party. We had people over all day, everyday. It would start mid-morning and go until we fell asleep, sometimes before the kids. I am sure we will never have another summer like that. It was a gift. 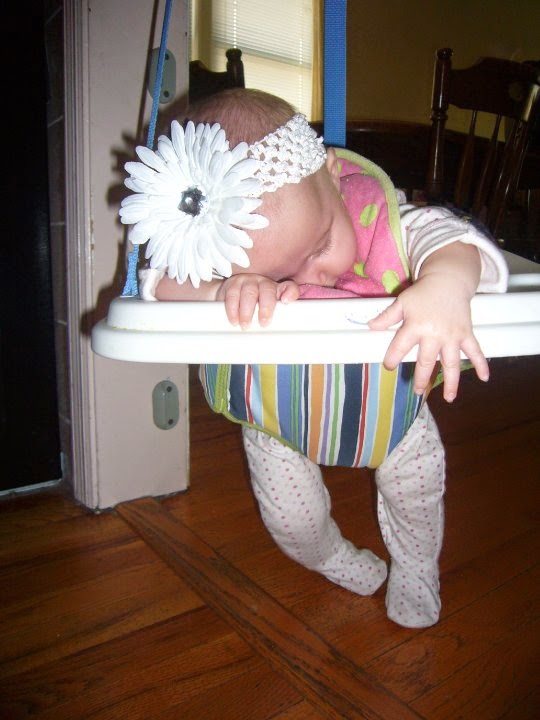 Thank God we had this doorway jumpy thingy to babysit for us that summer.

Around this time, we started the discussion about having another baby. After all, our youngest was almost six-months-old. We wanted to have a fourth and obvi had some weird fetish about having them as close together as possible. And Beau's back was on the mend. It was as if all of the stars were aligning. Now you may be thinking, but wait, you were both unemployed. You had no health insurance. Why in God's name would you purposely bring another life into this mess? It just made sense when we were drinking in the pool. It's a different mindset. Our rationale was, in nine months we would surely be working again. It would be fine. And it was.

The only real obstacle was our besties, Lion and Julissa, were getting married in August. I didn't want to be preggo for that. You know, because I like to get drunk. And I really tried not to drink much while pregnant. So, we decided to wait until after their wedding. It would be perfect. I could be pregnant all winter and be ready to whoop it up again next summer.  Yet, still be able to enjoy the rest of this summer. What could possibly go wrong? We were really pleased with ourselves. I believe we ended that convo with a high-five. Or perhaps something a bit more intimate, because a few days before the wedding, I started feeling funny. Not haha funny, just funny. A funny I was very familiar with. Math has never been my thing and with all of the alcohol I had been consuming all summer, I decided to take the old let's wait and see approach. Besides, I have a strict rule when it comes to taking a pregnancy test. Always do it on a Monday morning. Enjoy the weekend, because it could be your last, for a while. So that's exactly what I did. One of the best weddings ever. And Monday morning my suspicions were confirmed. Baby number four would join us in April. Summer was officially over. 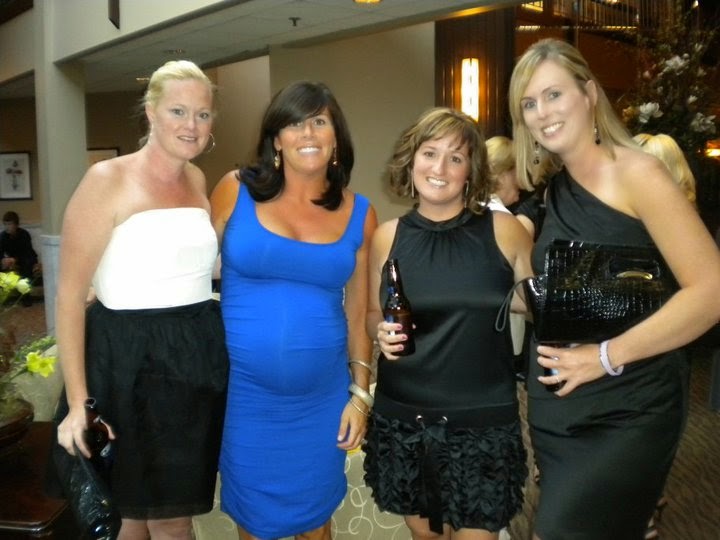 Here I am trying to conceal my baby bump with a beer.
When the baby was born, our other kids were three, two, and fourteen months. The only thing I remember being concerned about was, would the pool be big enough? For the record, we did find new jobs just as summer came to an end. I went on to lose that job at the end of the following year. But that's how it is when you work for one of the biggest and saddest school districts in the country. As we embark on another summer of pool parties I can only imagine what the future holds for us. Tons of laughs? For certain. Cold drinks? Always. Baby number five? You never know.

*This blog is dedicated to our friend Devin Dillen who had the absolute greatest reaction when we told him we were having another baby. It was a strange mix of disgust, shock, and sadness all rolled into one look. Thank you, Devin.